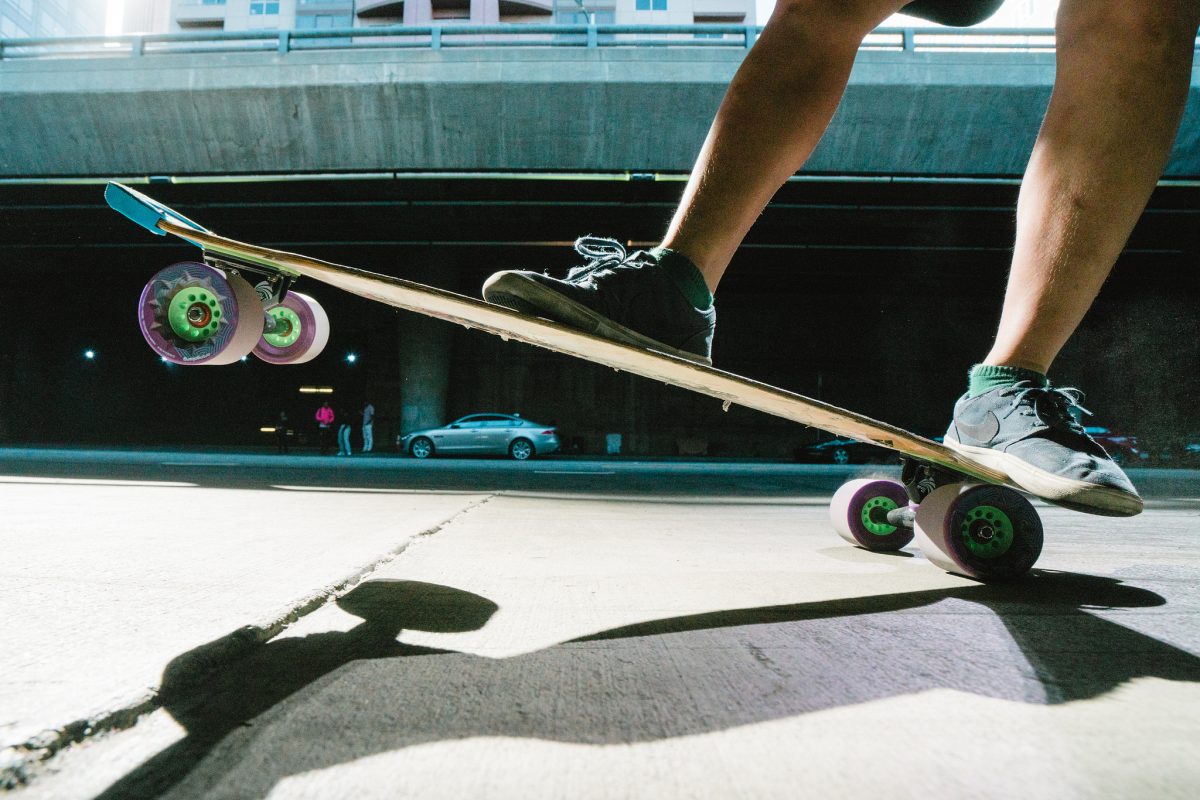 Several years ago when the Kegel was first released, there wasn’t anything quite like it on the market. They were really big and really fast, and for a while they were the choice downhill wheel for a lot of people. And then they caught on in the long-distance push scene, and people were running all sorts of technical setups for long distance push and pump with Kegels. Some ran just orange Kegels, some ran just purple Kegels. Some ran split Kegels, with purple in the front and orange in the back. It made them faster, they said (they’re not wrong).

Wheels like the Seismic Speedvent were released in later years in response to the Kegel, and subsequently, wheels got bigger and bigger. Wheels like the Flywheel were adapted for use in LDP as well. The market was no longer dominated by the Kegel, but rather shared by a couple companies with different wheels.

But now, that may come to and end with the release of the new Orangatang Caguama from Loaded.

The Caguama is an 85mm tall wheel with around the same contact patch as the Kegel (58.5mm as opposed the 56mm), and designed for the same all-around fast skating that the Kegel was designed for. Aside from the size, there are a couple differences, such as the rounded, stone-ground lip that’s meant to make hookups easier and kickouts smoother. There are theories that a round lip is also beneficial to rolling around, as they catch less on cracks and little pebbles.

They’re poured in Happy Thane (by far, my favorite urethane formula), a formula that’s used in formidable wheels such as the Kegel, Skiff and Fat Free. It’s a drifty, sugary, durable formula with plenty of rebound and versatility. The hookups are defined, drifts are in the pavement and predictable- they are the same and totally relatable at whichever speed you put them sideways at.

The Caguama excels at what it is designed to do- it is incredible for rolling around, floating on clouds around the city. Commuting to work or school? The Caguama is an incredible choice for your longboard. Granted, it will need a tweaked setup (or not) in order to fit these big boys, but after you’ve got your trucks dialed or raised, you’ll have the time of your life. They’re lighter than most wheels of their size, so they accelerate quickly, but they’ll hold speed like it’s their duty. The Caguamas eat cracks like breakfast too.

Sideways, they’re not quite as supreme as the Kegels are. There’s more urethane on a core of the same size, so logically, they honk a little more, and they’re less supported laterally. Going fast and if you’re heavy, they’ll be great, but for lighter riders and slower skating, you may want to defer to Kegels instead. However, it’s not terrible- since the width is almost the same as the Kegel, the lip is still well-supported by the core.

If you’re looking to grab a set of wheels that you can roll indefinitely on- you’ll be delighted to buy the Caguama. They’re the rolliest of them all! Grab yourself a pair at the link below! Here, have a video.