Colorado Based Sanctum Collective Stratos is made with the signature Alloy Construction that features 8 plies of maple with a single bottom ply of aluminum. The result is an absolute dream to skate.

Sanctum Collective is based in Colorado and with that comes the Colorado style. Their Sanctum lineup features some of the most unique construction and concaves on the market. The Stratos is made with the signature Alloy Construction that features 8 plies of maple with a single ply of aluminum on the bottom. This creates a very stiff, durable deck ready for the abuse that comes from downhill and freeride.

I’ve been skating the Stratos for about two months now and it has taken quite a few beatings; however, the crew at Sanctum make boards to last. The Alloy Construction has kept the board as stiff as the day I got, it has saved the Stratos from curbs and not surprisingly, it’s still immaculate looking! 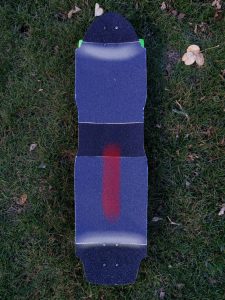 The Stratos features concave more focused towards downhill, but naturally it works just as well for freeride. Modest w-concave runs throughout the back half of the deck, .25in rocker running through the deck and .25in linear microdrops. The Sanctum team talking about the concave said, “The concave cradles the riders feet encouraging them to be in a more forward facing position, the unique feel is brought about by the zero flat concave.”

When I first got the board I thought it was really intense, but quickly realized that the Strato’s concave is most comfortable and more utilized when you are standing in tuck position. When in tuck position the concave really does cradle and hold you in position without being overbearing. I’d have to say that the Stratos’ concave is something that may have to grow on you, but for me personally it took about two runs to see why Sanctum put out this concave. It simply gives you more confidence. 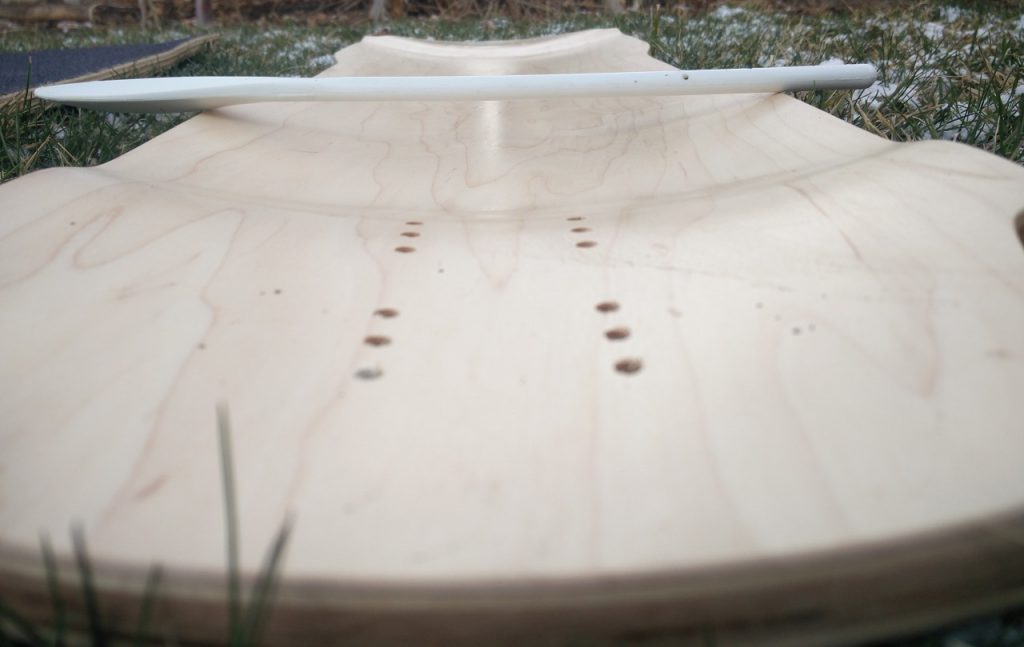 The Stratos also features flush mounts and CNC’ed wheel wells. Which means you don’t have to worry about the rocker messing with your baseplate angles. As for the wheel wells, they are absolutely massive! I was able to run Orangatang Kegels standing at 80mm tall without getting any wheel bite during my time riding.

This board is a dream to skate! The Stratos is that deck that just feels like an extension of your body while you are skating. Like Sanctum said the concave cradles you, which gives more confidence. I noticed very quickly thanks to the the microdrops and w-concave on a smaller width (9.5in) had me focusing more on the run rather than where I was on the board. We hear people and companies talk about reference points all the time, but I have yet to ride a board that gives such an easy board feel.

Downhill on the Stratos is incredibly comfortable as well. The concave is setup to basically assist you in your tuck. The flat concave allows you to have solid board feel and even more leverage without moving your feet while in tuck. On top of all of that, you can have a big tuck from microdrop to microdrop, a smaller tuck with your back foot on the w-concave or even smaller tuck setting your foot on the hip cut outs. Even with its relatively intense concave it is very comfortable to hold a tuck for an extended period on. This board was designed to rip up big runs!

Even though the Stratos was designed for downhill, it’s features transition very well to freeride. I find myself spending the majority of my time freeriding, varying at speeds from 20 to 35mph. The .25in microdrops kept me in place even in the most chunder filled runs. Any toeside I did I could count on the w-concave being there to support me, but not get in the way of my general riding. The deck is also a beast in switch. The drops are symmetrical so I never felt uncomfortable when in a switch position. In general, this board just holds you in place and when it comes to freeride that is all I could ever ask for.

Not all boards are perfect and the Stratos is no exception. First off the board is heavy due to the Alloy construction, but that was expected so I don’t know if I can really knock points off the board for that. The flush mounts could be a little longer, on the shortest wheelbase my K5 didn’t fit perfectly so I had to smash it in there, but it fit. So both of my complaints about the Stratos are pretty trivial.

Overall the Stratos is a beast of a downhill board and confidence inspiring freeride board. If you are looking for a board with a bit more aggressive concave, that can rock big wheels, with a bigger standing platform you would be hard pressed to find a better board than the Sanctum Collective’s Stratos.