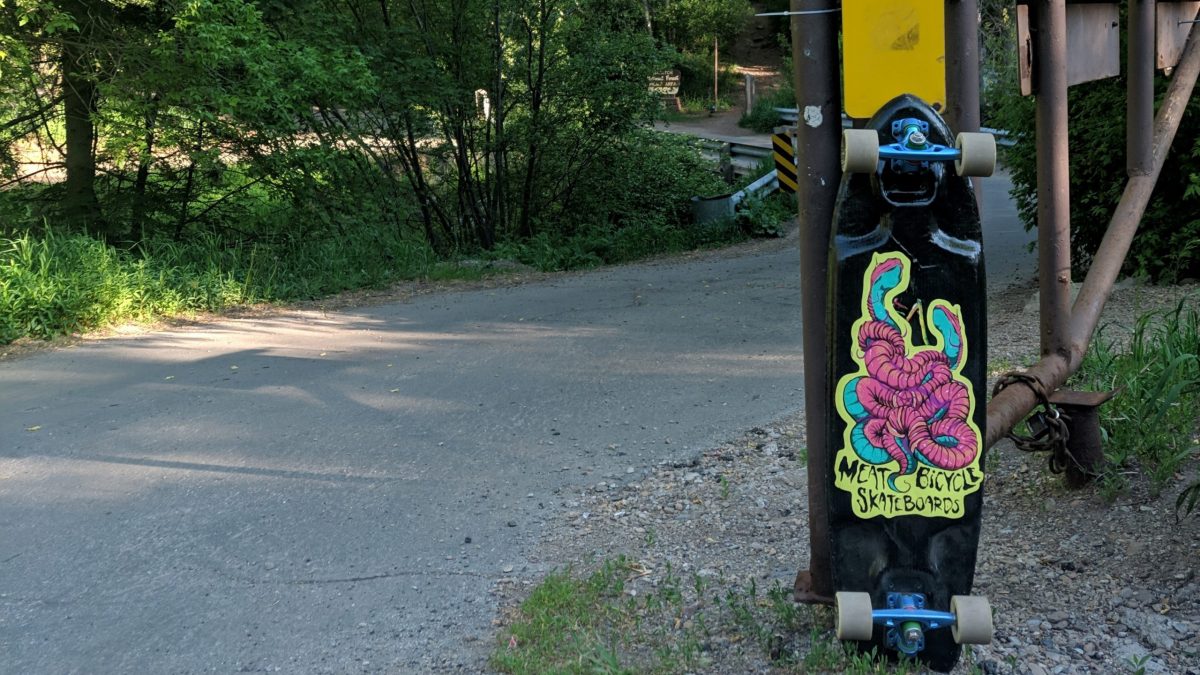 Ever wonder why we rave about Meat Bicycles? Because it’s warranted. Check out our review of some of their latest.

Meat Bicycles are made by PA local Zakk Hall and they are probably some of the most unique boards you’ll find on the market! With the help of Evan from Valkyrie, Zakk was able to create a beautiful, CNC’ed mold to create the feature heavy Meat Bicycle.

The construction is pretty simple on paper – the board is made up of an agglomerated tree bark core wrapped in carbon fiber. The core was chosen because the tree that produces the bark doesn’t need to be cut down to harvest. A single tree can be harvested several times without hurting the tree. This form of construction is great because the boards are lightweight, feature great vibration dampening properties and are water resistant and incredibly stiff.

I personally have fallen in love with the Meat Bicycle’s construction, having a speed stiff deck with no flex in any direction is obviously super important for both freeride and downhill. However, having a complete board weigh a total of 5.5 lbs makes an incredible difference when you are doing a lot of hiking between runs!

The Meat Bicycle concave was a collaborative effort between Zakk and Evan Aamodt (owner of Valkyrie Trucks). The unique and complicated concave is possible thanks to Evan’s background in CAD and his CNC capabilities.

The Meat Bicycle has five distinct parts to its concave: 1/2in radial concave, 3/8in rocker, 1/2in drops in the flair, deep flush mounts and rear w concave.

The concave seems intense to the eye, but once you stand on it you’ll quickly see how cozy the board can actually be. The radial concave is consistent through the deck even with the taper, which creates great and consistent rail feel. The combination of the linear drops and rocker allow you to dig deep into the concave to hold you in even the roughest conditions.

What most people are surprised to hear about the Meat Bicycle, is the fact it is actually a top mount board due to the combination of the deep flush mounts being inline with the drops. If look close you can see the smallest wheelbase allows you to stand on top of your trucks. To top it all off, the Meat Bicycle has a nice little egg shaped w concave in the back, the w keeps you locked in for all your toesides and feels great in tuck as well.

If big drops aren’t for you, Zakk also makes a more mellow concave on the Atomic Garden, which may fit your taste better.

I’ve never been the biggest fan of decks that have 1/2in or deeper drops, but the Meat Bicycle quickly won me over and has become one of my favorite decks. I think since the Meat Bicycle is technically a top mount, I have had no problem quickly adjusting to it and felt locked into the concave almost immediately.

Freeriding was an absolute treat. It kept the consistency of a top mount board but gained the super locked in feeling of a deep drop deck. Every slide I went into, I knew I was going locked-in. I could wedge my front foot as hard as I needed into the drops and my back foot could use the w concave to kick out clean toesides.

I think the the best part about the concave was being able to skate chunder runs without worrying about coming off my deck, I cannot praise Zakk enough for making a concave that keeps you absolutely bolted to your deck.

Downhill has become a treat due to the massive options the Meat Bicycle offers you – specifically how small you can run your wheelbase. Traditionally on a drop deck you had to stand behind your trucks/drop, but the Meat Bicycle changes that allowing you to stand on top both your front and back truck within your drops.

This gives you a massive increase in leverage for downhill and is a game changer for drop decks. However, if you want a more fun downhill setup you can always run a long wheelbase and get slidy!

If you miss the old days of drop decks but want all the benefits of a top mount then the Meat Bicycle is for you! The deck spoils you with its unique concave. You’ll feel totally locked in withou an intrusive concave that wears you out during sessions. Add on the super light and water proof construction and you get an absolute unit of a board!

Cons: a tad expensive, carbon base decks can delam from heavy abuse