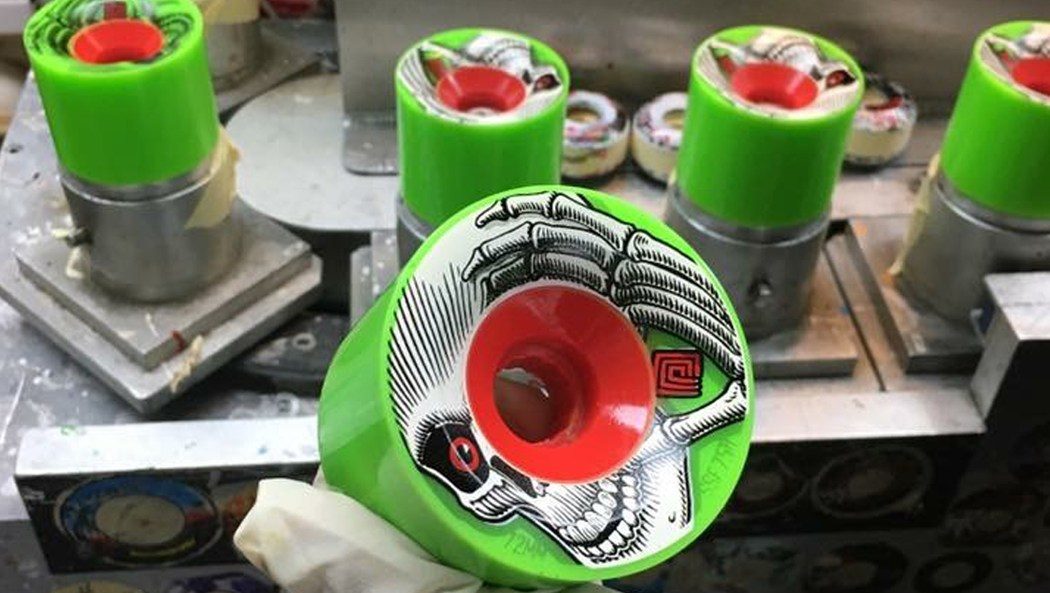 Freeride or Downhill – The new Powell-Peralta Kevin Reimer Pro Wheel will get you through it. Check out our review for more!

After three sets and countless hours on Powell-Peralta’s Kevin Reimer Pro Wheels, I’ve come to the conclusion that this is a freeride wheel you could downhill with enough experience.

The Powell-Peralta Kevin Reimer Pro Wheel, also known as the Krime wheel, is the middle ground between downhill and freeride. The wheel comes fresh with a mold release that holds up for a couple runs then quickly wears into a freeride wheel. It features an inset core like Ahmyo’s Akasha, but the inset is slightly smaller at 2mm making them still flippable for even wear.

The Pro wheels also feature a H5 fiber infused core which offers superior strength and an improved bond to the urethane rather than using a grove or other traditional methods to adhere the core and urethane.

It features a mold release, a big contact patch and its above 70mm so it meets the general standard of a downhill wheel but there are two key reasons why I wouldn’t ride it as a dedicated downhill wheel:

Even with these two drawbacks, you can still downhill these wheels if you are willing to sacrifice grip and are able to adjust to the very slidey formula.

I bought these wheels with the idea that they would be a great, fast freeride wheel with long life and I was not let down! Like I mentioned earlier the formula is slidey as far as downhill wheels are considered, but as for freeride goes Powell and Kevin got it just right. It is incredibly consistent across different pavements, durable yet leaves a little thane, consistent breakout and hookup, solid feedback during the slide and all of this is uniform throughout the life of the wheel.

The consistency of this wheel is confidence inspiring. It had me going faster and sliding further than I’m used to with some of it’s competitors.

Despite how incredible these wheels are for freeride, there are a few notes. The wheel is affected by temperature – I noticed a huge difference between skating them in 90F and 40F. On hotter days they became more slidey and left more thane, while on colder days the opposite was true. Now a lot of wheels do this, but it was more noticeable on the SSF Pro formula. Some locals and I determined that in the colder weather you can expect almost a 20% increase in stopping power and 10% increase in grip; however, the slide’s breakout/hookup and road feedback seem pretty consistent between the hot and cold days.

These wheels have a top-of-the-pavement sensation to their slide – a simultaneous chalky and icy feeling. The slide is smooth like ice yet provides considerable feedback like you’d imagine from chalk on a sidewalk.

If you are riding Powell Peralta Snakes or their SSF Scale counterparts and want to know the difference between the wheels, I’d say the Kevin Reimer Pro Wheels are probably a little faster but has about a 20% increase in stopping power.

The Powell-Peralta Kevin Reimer Pro Wheels are an exceptional freeride wheel that also work well for downhill if you have the skill. At $44, you’re getting a durable wheel with proprietary urethane and a unique core. Bottom line – I’d highly recommend these if you’re doing fast freeride, mastering your pre-drifts, some light downhill or all of the above.

Cons: Skin Doesn’t Last, Graphic Falls Off (if you care), Only Come in One Color, Not a True Downhill Wheel

Buy Now
Processing…
Success! You're on the list.
Whoops! There was an error and we couldn't process your subscription. Please reload the page and try again.