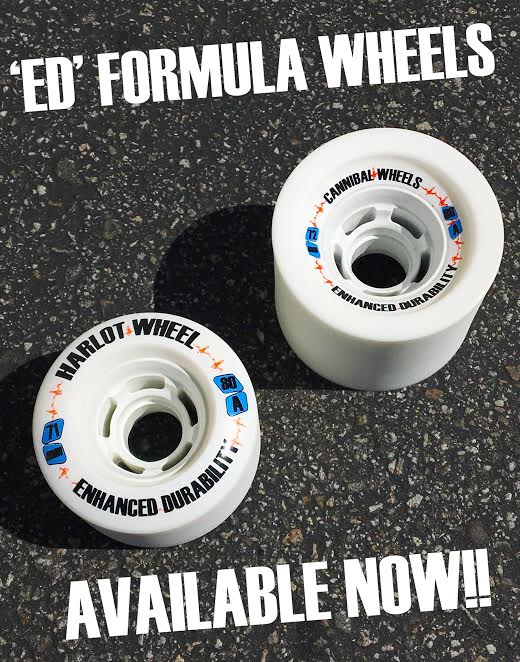 You’ll get frustrated at how durable these wheels are! Get a set before they sell out completely!

Venom has been at the top of the urethane game for a long time now. The original mass-producers of a huge variety of bushings, Venom has also been the greatest creator and designer of many cores, urethane formulae and shapes on the market since day one.

Much of Venom’s well-deserved fame comes from their Cobra cores- a proprietary core that’s almost unmatched in speed, grip and slide characteristics. Debuting in late 2015, they replaced the generic cores in the old Cannibal wheels, a downhill wheel offering that’s infamous for being grippy as sandpaper with fresh skin, and a freeride-able goodie when broken in. Since then, the Harlot was born into the Cobra Core lineup, a freeride wheel with the same urethane formula as the Cannibal, but in an addictive round bevel shape.

This year, Venom created the Hard in the Paint urethane formula, a formula we covered last month that’s reputed to leave thane lines when you kickturn. However, there was a small mishap during the release, when Venom’s wheel factory mispoured the production models with an 80a Mach 1 urethane formula, which is another one of Venom’s Cannibal formulas. Riders found this to be incredibly resilient and durable, prompting Venom to embrace one of their mistakes and release the wheel in that same mispoured formula, now named the Enhanced Durability formula.

Rider testimony has been incredibly positive- it’s said to be fast (after all, the 76a Mach 1 formula broke the speed record) and awesome for all different kinds of asphalt pavement. The resiliency of the formula is good for practicing, as you really don’t need urethane lines for practice.

Get a set now! Venom is sold out, but Muirskate has a few Harlot sets left!