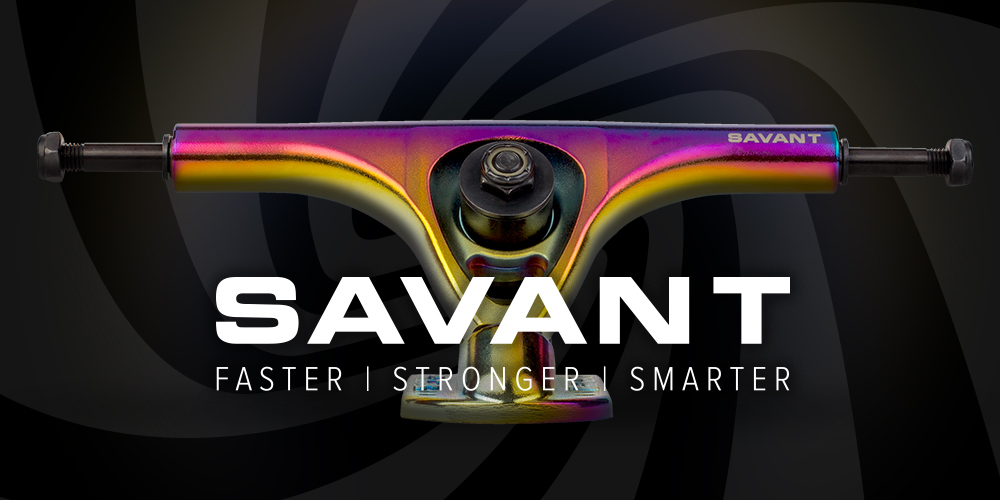 These new, narrow Paris Savants will give you superpowers! Check them out!

Over the years, it seems, trucks have been decreasing in width. Back in the original days of longboarding, way back in the early 2000s, wide hangers up to 210mm were looked favorably upon because they were believed to be more stable. And that’s true- wider hangars are less responsive and they’re great for going fast in straight lines.

But that’s not downhill anymore. Now, we’re talking technical downhill/freeride courses where fast braking and deadly quick rail to rail action is required. And for that, shorter hangars are necessary and beneficial.

Recently, we’ve been seeing many truck companies come out with shorter hanger designs. Paris Truck Co. is not an exception. New from Paris Trucks is the 165mm Savant, their forged precision truck offering.

The 165mm Paris Savants are mostly unchanged from their 180mm counterparts- they’re just as strong (if not stronger, because of the narrower width), come in three great colorways (with a fourth, slightly teased extra colorway that should be coming soon), and come with machined top-hat washers and awesome stock bushings.

Technically speaking, the Paris Savants have a more precise bushing seat and pivot cup than the regular Paris V2 offering. The seat is semi-machined and precision fit, and the pivot is machined on a lathe as well. Compared to the cast versions, the pivot on the Savants are much fatter and a bit more square, giving you a larger center for racing purposes.

These are bound to be great not just for technical downhill and freeride, but also for freestyle and dancing purposes- it’s been awhile since there were trucks of such amicable widths that are so great for dancing and freestyle. If you’re a flowy, stylish freestyler, try these out!