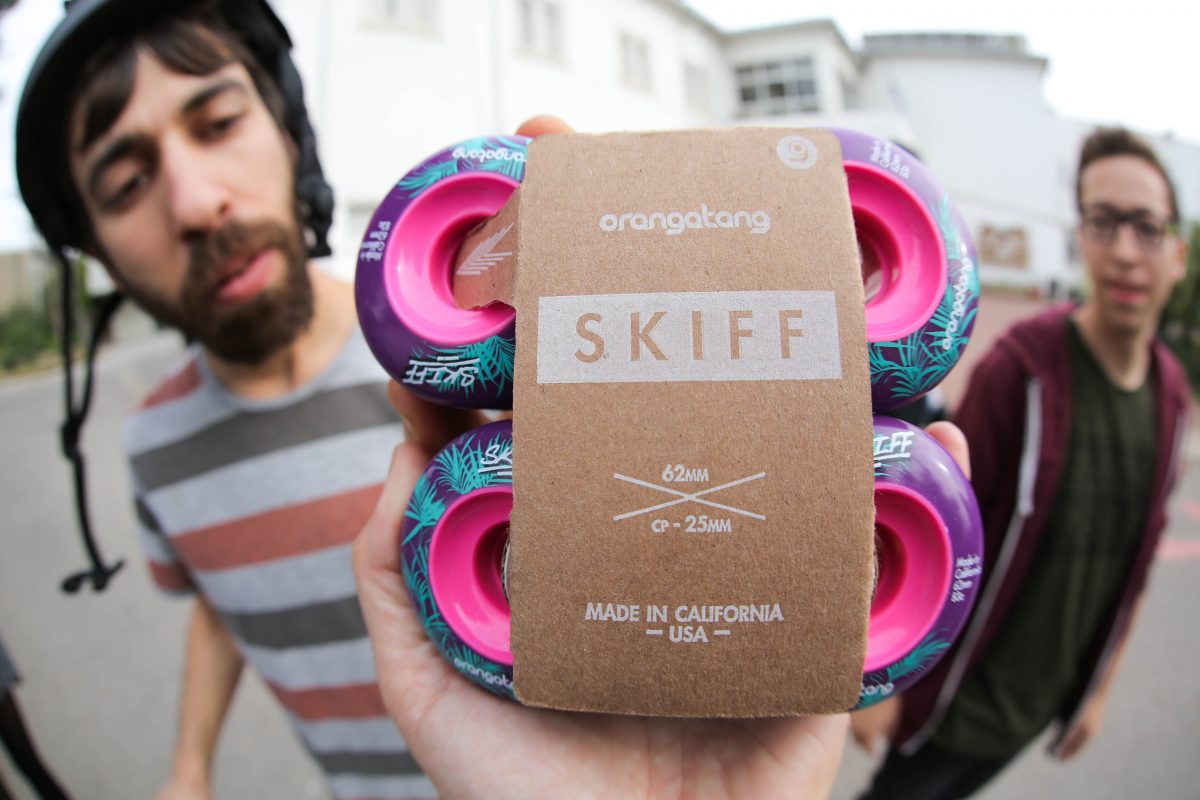 Slide, slash, bank anything with these wheels from Orangatang! They’re sure to rustle your jimmies!

Also some of the first to come up with a diversified wheel series to cover several riding styles such as downhill, freeride and cruising, and one of the companies that helped to spread the message of downhill skateboarding across world.

From such a great company, it’s reasonable to expect a great product or two every couple years- I definitely do. And it was no surprise when Orangatang released the Skiff, a fun freeride wheel in a similar class to Rayne Envies, Tracer Hawgs, Seismic Crybabies and other wheels with a small contact patch and slippery urethane.

These wheels were made for one purpose- fun and easy freeriding. These are the wheels that people break slide records on, the ones that people win slide jams on!

The Orangatang Skiff was something of an experimental project after the release of the Onsen back in 2015.

The small core inspired the designers and riders at Orangatang to substitute the hard urethane for a softer freeride urethane, and the result was a small, successful run of 83a Skiff-prototypes.

Production of a more refined shape came very soon, with the wheel being produced in all 3 durometers of Happy Thane- 80a, 83a, and 86a.

We at Longboard Envy HQ received the 80a, mainly because one of Ryan’s favorite urethane formulas is Happy Thane in 80a- his first wheels were 80a In Heats, and most of his slides were learned on them.

So it was a trip to the past for him when he got the 80a Skiffs.

The 80a Skiffs in shape are a simple wheel- a small, 62mm diameter, 35 mm wide wheel with a tiny 25mm contact patch. Because of the simple shape, your expectations can be just as simple- they’re just a wheel that slides really easily!

Many other wheels perform completely differently than what you expect them to- they seem slidey, but then you go for it and they kill more speed than your last set of scrubbed downhill wheels.

Skiffs are totally unlike that experience- you slap them on, and your first slide is a totally predictable, icy slide that doesn’t surprise you. Like all Happy Thane wheels, Skiffs have a very defined kickout and hookup.

That means that Skiffs likely won’t ice out before you want them to (in any reasonable circumstance). They require a nudge or a kickout in order to start sliding.

They will suck right back in for a hookup if you want them to- they won’t hang in some kind of slide purgatory before they grip up again. This makes Skiffs a good wheel to learn drifts on- it’s easy to tell when you’re sliding and when you’re not.

But again, your mileage may vary and you may find that Skiffs are more scrubby than you like. I found them to be slidier than In Heats.

The feel of the wheel is consistent all the way from the beginning to the end of the wheel- the contact patch increases slightly as you wear the wheel down, but because the meat of the wheel is smaller or equal to the size of the core, the slide really doesn’t change much.

I did find that the inner meat of the wheel was slightly more slippery than the fresh stoneground skin though. Some say that Skiffs flatspot too easily, but I think that’s just a general statement for any wheel that thanes hard- I had some flatspots while I was using them, but they came right out with a few drifts.

As for other applications, the Skiff is quite strong in the street slash game. Throw them on your favorite small kicktail board, and you can slash banks and driveways like they do in the YouTube videos! They’re also nice as dancer wheels since they’re small and soft.

All in all, I’m very impressed with Orangatang Skiffs- I just bought my second set this week! Oh, don’t forget the completely nonsensical video they made for the wheel too- it’s one of our favorites.

Want more like this article about the Orangatang Skiff? Sign up below for news, updates and discounts!