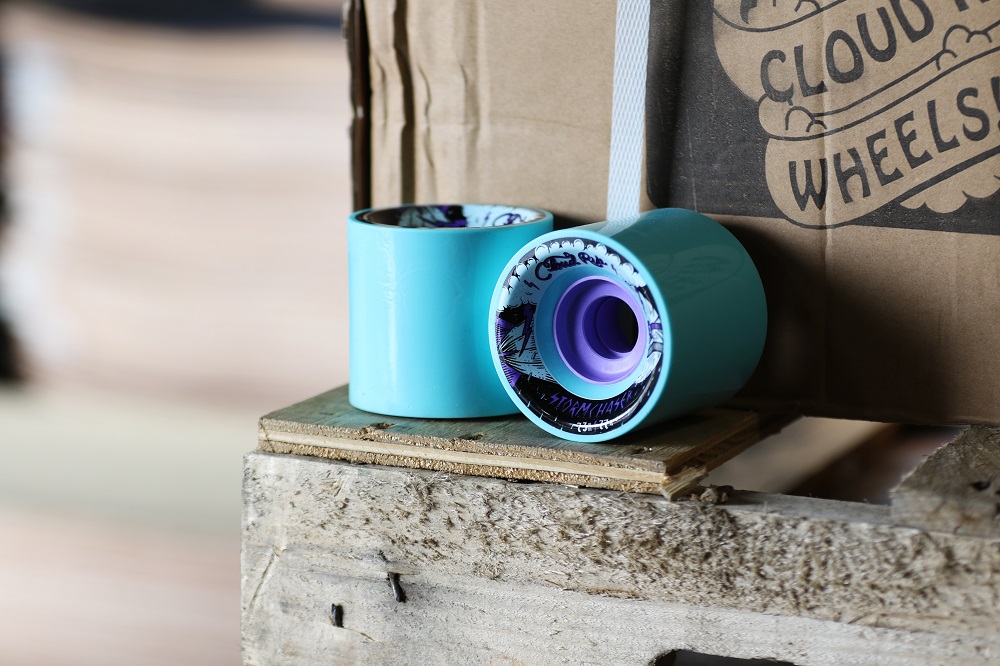 Cloud Ride has created possibly the stickiest wheel on the market. Check them out!

It’s been awhile since I reviewed a wheel! A couple weeks ago, I received a set of Cloud Ride Storm Chasers in the mail- they’re the new downhill wheel from Cloud Ride wheels, a popular urethane company affiliated with Atlas and DB Longboards. Historically, Cloud Ride has never had a grip wheel offering. The Freerides were grippier than most, but their shape and urethane was still engineered to give a nice, in-the-pavement slide. However, with the Storm Chasers, Cloud Ride finally has a fully fleshed-out wheel lineup, all the way from cruiser wheels to downhill-heavy grip wheels.

I had heard some rumors that the Cloud Ride Storm Chasers were the same stock core and generic urethane as some other downhill wheels on the market. But I was a little skeptical of these rumors, since Cloud Ride had been advertising their custom core for months now- and it’s true, they’re definitely custom. It’s called the Thunder Core, and it’s actually produced at a facility separate from the one where the urethane is poured; definitely a higher-end process, since many wheel companies just choose from the selection that the urethane company offers them. However, that’s not to say that the Thunder Core is anything ordinary- the recessed design is unique when compared to other proprietary cores such as the Cobra Core or the RAD Crown Core; those are large, but the Thunder Core is small, with support ribs closer to the bearing hub.

This allows for an incredibly gushy, soft-feeling wheel. The small core allows urethane to deform further than other wheels, and the difference is absolutely noticeable. In my time riding the Cloud Ride Storm Chasers, I’ve noticed that I’ve been able to grip drift corners and have difficulty putting down small bike paths where I would normally pull off drifts and checks on my other wheels. Naturally, I’ve been riding a lot faster than I normally would.

The slide is definitely in the pavement- the skin takes around 4-5 fast drifts to take off completely (I do wish it lasted a little longer), and the slide is a little choppy with the skin on, but afterwards, it’s wonderful for anything race-esque. They kill so much speed compared to large-contact-patch wheels such as Cult Raptures and Biggie Hawgs because they’re grippy (not to say that they’re bad wheels, they’re great too) and really dig into the ground. I’ve never felt safer going down a hill with cars coming up the other side. I know I’d be able to stop with only a moment’s notice.

Some auxiliary information- Storm Chasers are seriously, seriously heavy and carry a metric crap-ton of momentum. They make some very good commuting wheels if you can get some shorter hangars and make them stick out anything but an inch out the side of your board. Just a personal opinion, Cloud Ride should make a version that’s offset just for commuting purposes. They’re so cushy!

All in all, I’ve thoroughly enjoyed Cloud Ride Storm Chasers; if you’re looking for a grippy, responsive, speed-killing, fast wheel, these might very well be for you.